The New Martyr, Grand Duchess St. Elizabeth Feodorovna Romanova, is a real “Olympic hero” of the Faith, and provides for us a 20th century model of how to truly live the Christian life. The future saint and holy martyr of the Russian land was born into a pious Protestant princely family in southern Germany, a grand-daughter of England’s Queen Victoria. Although high-born and wealthy, these meant little to her, and she learned from her devout mother to have compassion on those who are poor, destitute, sick, orphaned, and to be actively engaged in charitable works, helping those in need. When she was only 14, Princess Elizabeth (or Ella, as she was called), had to cope with the tragic death of her mother. Several years later Elizabeth met Grand Duke Sergei Aleksandrovich Romanov, brother of Tsar Alexander III of Russia; they fell in love—a love affair that lasted their whole lives. In 1884 they married and Princess Ella moved to Russia, and became Grand Duchess Elizabeth Romanova. A few years later her younger sister, Alexandra, married Tsar Nicholas II, making Elizabeth both the sister-in-law of the Tsar, and the wife of the Tsar’s uncle. The future saint and martyr quickly came to truly love her adopted homeland—its people and its Faith. She reveals her feelings in her numerous letters: she tells her father how of her own free will she came to love the Orthodox Faith, and begs his blessing for her to convert. Orthodoxy truly spoke to the future saint’s profoundly faithful, loving  and compassionate heart.

Having been involved in doing charitable works since childhood, she continued such works in her new home, Russia— personally caring for the needy, and building churches and monasteries. She and her husband were also much involved in the Russian Spiritual Mission in the Holy Land, and in building and maintaining churches and monasteries at its holy places, especially the Women’s Monastery of St. Mary Magdalene in the Garden of Gethsemane.  The future saint was especially devoted to St. Seraphim, and she and her husband were present at Diveyevo for his glorification/canonization in 1903. 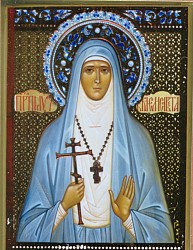 The brutal assassination of her husband by revolutionaries in 1905 significantly changed the saint, and several years later she became the founding abbess of Moscow’s Mary and Martha Women’s Monastery, Hospital, School and Orphanage, founded through the sale of her own possessions. She dedicated herself and the sisterhood to charitable work: visiting, nursing, feeding and teaching the poor; teaching and caring for poor children and orphans; and nursing and caring for the wounded during World War I. She continued her holy work for 6 months after the Communist Revolution, until the Communists led her away to a martyr’s death near the Siberian town of Alapayevsk on July 5th/18th. She had rejected many pleas for her to flee Russia, accepting, instead, to follow Christ’s path to Golgotha, with faith and humility.  Her relics, and those  of her cell-attendant, Sr. Barbara, were smuggled out of Russia, and brought to the Holy Land — to the St. Mary Magdalene Women’s Monastery in Gethsemane, where she had wanted to be buried.  Finally the Church was able to glorify/canonize St. Elizabeth in April 1992.

Note: The group of 5 women saints and the detail of St. Elizabeth at the top, were painted by the master iconographer, Fr. Theodore Jurewicz, on the rear nave wall of St. Innocent Church, Redford, Michigan in 1997.