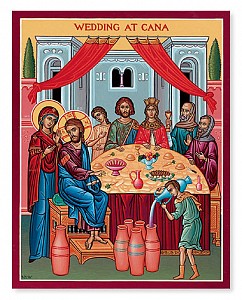 Holy Matrimony is a Sacrament (Holy Mystery) of the Orthodox Church, in which a special union of a man and woman occurs and the two become one, as God transforms human love and desire for companionship into a union of body and spirit, of heart and  mind.  The beauty of the Marriage Divine Service reveals a vision of Marriage as an icon of the nature and life of God.  It is God Himself, through His priest and His Church, Who unites the couple and maintains them in peace and oneness of mind. In contrast, in Roman Catholic and Protestant weddings, the bridal couple themselves marry each other by their mutual exchange of vows.  However, in the Orthodox Marriage Divine Service, no vows are exchanged at all, because no human vow can possibly unite a man and woman together in the grace-filled and absolute way called for in a true Orthodox Christian and Christ-centered Marriage.  The Service includes many prayers that, just as God blessed various holy people in the Biblical past, so He might also now bestow His blessings of peace, harmony, love, chastity, fair children and a holy life upon the bride and groom.

The Service of Betrothal

In the past, the Betrothal was essentially the rite of what today we call becoming “engaged,” and was performed separately from the Marriage Crowning. Today, the Betrothal and Crowning are usually served together.  The Betrothal customarily is done at the rear of the church. The central act of the Service of Betrothal is the giving and exchanging of rings, with the accompanying prayers. Because a circle symbolizes oneness and eternity, the exchanging of rings during the Betrothal signifies the consent and desire of the couple to be united by God in a permanent union.  The exchange of rings is also a sign of their pledge to each other and to God to preserve their marital union, and to follow God's commandments. (The exchange of rings does not constitute the act of marriage itself, as it does for Protestants, Roman Catholics and in civil weddings: there are no vows, no “I do’s,” no “With this ring, I thee wed...”) The giving of the rings to the couple by the priest represents the pledge of God’s blessings on their Marriage.  The wedding rings are worn on the right (not left) hand by Orthodox people, because the grace and power of God’s activity is symbolized by God’s right hand and arm.

The Service of Crowning

The Candles
After the Betrothal, the priest leads a procession to the front of the church. This symbolizes that the betrothed couple are approaching the Kingdom of Heaven as they are about to partake of the Mystery (Sacrament) that parallels the great Mystery of the union of Christ, as the Heavenly Groom, with His Bride, the Church. The priest then blesses the bride and groom with candles, and gives them to the couple (or sponsors), who hold them throughout the Service of Crowning. The candles symbolize the couple’s desire to live holy lives in a true Orthodox Christian Marriage, which will be a light, example and witness to others of Christ’s love. It is the priest who gives the candles to the couple, to represent that it is God Who gives the blessings of purity and holy life in their Marriage.  Also, the lighted candles symbolize Christ as the Light of the World, and thus, here expresses the couple’s desire to follow Christ as The Way, The Truth and The Life.

The Crowning
The Crowning is the central act of the Marriage Sacrament, the act by which the couple is married.  The Crowning is a visible expression of the bestowing of the grace of the Holy Spirit, whereby the man and woman are united by God to each other.  The crowns represent God’s blessing of glory and honor upon His servants, as expressed in the Prokeimenon: “Thou hast set upon their heads crowns of precious stones; they asked life of Thee, and Thou gavest it to them” (Psalm 21:3-4).  The crowns also symbolize the crowns of victory of the martyrs, who witness and die for Christ’s sake, and thereby enter into the Kingdom of God. This is because in true Orthodox Christian Marriage the husband and wife must die to themselves and give up their own selfish desires, and live for God, for each other, and for the good of the children born of the holy union. The Marriage Crowning furthermore is a coronation of a king and queen, for the Orthodox Christian home is a little Kingdom of God, a little church, in which the husband and wife are king and queen. In the Epistle reading (Ephesians 5:20-33), St. Paul explains how the great Mystery of the union of Christ with His Bride, the Church, is the prototype of the mystery of the union of the husband and wife with each other. In the Gospel reading (John 2:1-12), we are made present at the Marriage in Cana, where Christ blessed Marriage by His Presence.  As Christ then transformed ordinary water into fine wine, so likewise, Christ now transforms human love into a love pervaded and sanctified by divine grace.

The Common Cup
The first act that the now newly married couple does is to drink three times from the Common Cup.  This act expresses (1) their unity with each other in the Holy Trinity; (2) their common life in the Body of Christ - the Church; and (3) that in their Marriage they become as one person, comple-mentary to each other, sharing all things as one person - both joy and sorrow, blessings and tribulations.  Drinking of the Common Cup is also a symbolic reference to receiving Holy Communion together, which is the first and primary act of the Christian life, and therefore, necessarily the first and primary act of the Orthodox Christian Marriage.  In the Orthodox Church, receiving Holy Communion together is viewed as the visible expression and consummation of Holy Matrimony.  Originally, Marriage was a part of the Divine Liturgy, and the Common Cup truly was the Holy Communion. (The Common Cup used here, however, does not contain the consecrated Blood of Christ.)

The Triple Procession
The second act that the newly married couple performs in their Christian life together is to process three times, led by the priest, around the central table, upon which are placed the Holy Gospels and the Life-Giving Cross, while the, hymn, “O holy martyrs, who fought the good fight and have received your crowns......” is being sung. This procession is similar to the triple procession in Baptism, because the new life as a married couple is similar to a new spiritual birth in Baptism.  The meaning of the Marriage triple-procession is that the husband and wife are always to process through life in worship of the Holy Trinity, making God’s Word and the Cross the center of their Marriage and home.  For only when God indeed is the center, nourishing the roots of their Marriage, is the ground fertile enough to receive and cultivate the fruitful blessings of Orthodox Christian Marriage — the beauty of love, unity, peace and creation of new and holy life.

The husband and wife, now made one by God in the Crowning, must continually renew the spiritual roots of that unity, living as though the crowns were always on their heads, by faithfully re-enacting in their daily lives these first and second acts of their Orthodox Christian Marriage, and witness to the power of Divine Love present in the little church that is their home.

Written and prepared by Sister Ioanna