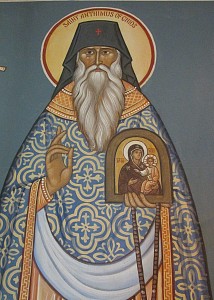 This venerable holy father is not renown due to his scholarly activities, teaching or preaching, or his high position in the Church, but for his deep faith, his simple love of God, his powerful prayers of intercession before the icon of the Mother of God “of Good Help” and the resultant healings, his gift as a spiritual father to all who came to him for counsel, and his deep humility and asceticism during his 91 years on earth.

The future saint was born in 1869 into a devout peasant family on the Greek Island of Chios, in the Aegean Sea. His formal schooling was limited, for he left elementary school early in order to take up the shoemaker’s trade. When he was nineteen, his mother gave him an old icon of the Mother of God “of Good Help” to take for restoration to a monastery recently founded by the holy monk Pachomios (the spiritual father of St. Nectarios of Aegina). The monastic life that Anthimus observed there so reverberated in his soul, that Father Pachomios accepted him as a novice, impressed by the youth’s obedience, silence and zeal for prayer, and discerning in him his future as a great spiritual father.

The youth returned to his village and built a little hut there, where he practiced the ascetic life, under the direction of Fr. Pachomios. He was accompanied for the rest of his life by his mother’s precious icon of the Mother of God “of Good Help,” which was indeed a source of enormous help to him, as well as a source of miracles for those who came to him for the rest of his long life. Eventually the novice moved to the Monastery of the Holy Fathers, where he was tonsured a monk and given the monastic name of Anthimus.

After this, he was put in charge of the construction of a newly-founded women’s monastery, but soon fell ill, and had to return home to his village. Back at home, he looked after his aged parents, supported himself by his former shoemaker’s trade and gave alms to the needy, while continuing his ascetic life as though still at the monastery. He combated demons and prayed in the hollow trunk of an old olive tree near his cell, and denied himself physical comforts with strict asceticism.

Over the years, increasingly more people came to his hermitage, attracted by his virtues and by the miracles worked by Fr. Anthimus’ icon of the Mother of God. When he was about forty years old, he was tonsured into the Great Schema, after which the people appealed to the Bishop of Chios to ordain the holy monk a priest, but the bishop refused, citing the Saint’s lack of education. His godfather invited him to the Diocese of Smyrna, where he was ordained. At the very moment of his ordination, the earth shook, and there was lightening and thunder, which was understood as a testimony to the saint’s worthiness; shortly thereafter Fr. Anthimus healed a possessed man. But, as frequently happens, virtues and miracles arouse jealousy, and he had to leave the region. After a pilgrimage to Mount Athos, he returned to Chios, where he was appointed chaplain of a leper hospital. Not complaining about a “bad assignment,” St. Anthimus blossomed where he was planted. Within a short time he had transformed a place of physical and spiritual misery and hopelessness into an image of paradise. He visited all the sick, tended to the worst afflicted with his own hands, and, through his love, humility, and good counsel, returned many lost souls to God, a number of whom became monastics. Countless people from the outside came to the elder, and received physical, emotional and spiritual healing by his prayers, words and example.

The persecution of Greeks in Asia Minor by the Turks that ended in the great exile of 1922-24, brought many refugees to Chios. About forty nuns and girls, who would have been destitute without his assistance, gathered around Father Anthimus. Encouraged by a vision of the Mother of God, he fulfilled a life-long dream of establishing a monastery on a certain site on his native island. In 1927 he received permission to establish a women’s monastery there, and then set to work, organizing everything necessary to create the monastery. In just two years his Icon of the Mother of God of Good Help was solemnly transferred to the new monastery church. The future saint was to live here for the rest of his life, serving as the spiritual father for the monastic community, which soon grew to eighty nuns. But he also continued to be the consoler, intercessor and spiritual father for the whole population of the island of Chios, especially ministering to the sick who came to him — sometimes as many as 60 or 70 in one day — asking for his help and his prayers before the Icon of the Mother of God of Good Help.

For thirty more years he continued this ministry for the salvation of souls and the relief of bodily ills, until he finally gave up his soul to God on February 15, 1960, at the age of 91. He was mourned by the whole island of Chios. He continues to help those who pray to him with faith, especially healing the sick. In 1992 he was glorified as a saint by the Patriarchate of Constantinople.

The icon at the top was painted/written by Fr. Theodore Jurewicz, of Erie, Pennsylvania, and is located on the vestry wall at St. Innocent of Irkutsk Orthodox Church in Redford, Michigan.