ST. ANTIPAS THE HESYACHAST OF ROMANIA 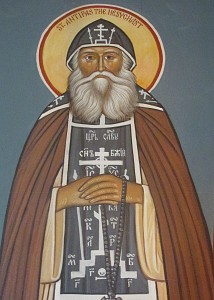 St. Antipas is not well-known as are Saints Seraphim, Sergius and Nectarios.  However, there are many striking similarities in their lives. As occurs frequently in the lives of so many saints, St. Antipas confronted repeatedly not being able to do what he wanted. Of course, this happens to all of us. But most of us get upset and grumble and complain when what we want is thwarted, whereas for the saints, they use the thwarting of their own wills as an opportunity to die to themselves, overcome their egos, acquire humility and learn obedience to God’s Will. St. Antipas’ great desire his whole life was to live alone as in a desert, and practice the life of silence and inner prayer of the heart. But he had to learn inner discipline by means of hard labor, surrounded by people, even in big cities.

St. Antipas was born in 1816 in a little village in Romania. He decided to become a monk at the age of twenty, after he had a vision of the divine light. For two years he labored as a novice at a small monastery, where a hermit taught him the practice of inner prayer. He advanced so rapidly, that his Father Confessor advised him to go to Mount Athos—the “Holy Mountain”—a peninsula in northern Greece with numerous monasteries, where only monks who seriously desire the life of asceticism and inner prayer live. The young novice wanted to live the solitary life immediately, and asked to become the disciple of two Romanian Elders. But they insisted that he live in a community (cenobitic) monastery first, where for four years he labored in the kitchen, struggling desperately against a heart full of darkness and distress, trying to maintain his inner life of prayer. Finally the two elders tonsured him a monk, with the name Antipas. But his life of solitude was short-lived, because one of the elders, Father Niphon, wanted Antipas to help him to establish an independent Romanian monastery on Mount Athos, and a metochion (dependency) in Romania, as a means of support of the Athonite monastery. First, Father Niphon put Father Antipas in charge of the building-works for the new and growing monastery on Mount Athos, while the elder established the metochion in Iasi, a major city in Romania. After three years, the Elder sent the young monk to Iasi to run the metochion there. Instead of the solitude, peace and quiet he desired, he found himself in the tumult of a large, bustling city. He increased his ascetic discipline, fasts and vigils to protect himself against temptations, with the result that his friendship with God increased daily. Wanting to remain hidden, his sanctity became obvious, and increasing numbers of people came to him for spiritual advice and guidance. He begged to be allowed to withdraw to the solitary life, but instead he had to forego his own will once again and go to Russia to raise funds for the Athonite monastery. Then Father Niphon returned to Romania, leaving the young monk alone in a foreign land. For a while he was able to live as a recluse, but the gifts for the Romanian monastery poured in. When he sent the money and gifts to Mount Athos, the ship went down in a storm and everything was lost. Instead of despairing, he continued his mission in St. Petersburg. Attracted by his wisdom and spirituality, many of the faithful came to him for guidance, and left gifts, so that he could soon send another large sum to Mt. Athos, which, this time, got there.

In 1865 Father Antipas completed his mission on behalf of the Romanian monastery on Mount Athos, and was free then to go to the Valaam Monastery—“the Mount Athos of the north”—where he lived for the rest of his life (17 more years). He withdrew to a small isolated cell, in order to further his life of inner quiet (hesychasm) and prayer of the heart. He spent his time in both liturgical prayer and inner prayer. However, making himself all things to all people, he freely gave of himself to the pilgrims who came from afar to see him, thus guiding many monks and lay people from northern Russia and Finland. He was able to bear all kinds of adversities—including opposition from those who were jealous of his renown— due to his deep humility, his readiness to blame himself, and his total freedom from all attachment to this world. At the end of his life of love and obedience to the Lord’s will, this friend of God got sick, and within a year he had departed this life for the heavenly kingdom, at the age of 65.  In 1906 St. Antipas became the only Romanian monk who lived on Mount Athos to be canonized/glorified by the Church of Romania. His veneration was recognized by the Russian Church in 1991, after his relics were uncovered at Valaam Monastery, (after it was reopened).

The icon at the top was painted/written by Fr. Theodore Jurewicz, of Erie, Pennsylvania, and is located on the vestry wall at St. Innocent of Irkutsk Orthodox Church in Redford, Michigan.