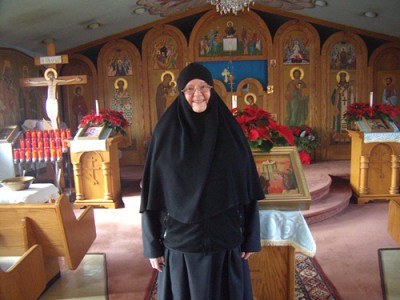 The founder and Head of the St. Innocent of Alaska Monastic Community is Sister Ioanna, who became a  monastic on November 11, 2001, at the hand of Bishop (now Metropolitan) Merkurii of the Moscow Patriarchate. Having been blessed by the Lord to be close to Him since she was a child, this was the fulfillment of Sister Ioanna's teenage dream.

In addition to loving the Lord, Sister Ioanna has also always loved learning and teaching, and thus has been involved in education for most of her life. Her undergraduate B.A. work at Hobart and William Smith Colleges in Geneva, NY, involved split majors in religion, philosophy and French, and included many courses in psychology and sociology.  In addition, she was the first student to complete the Certificate in Religious Education program. Furthermore, she was also the first woman to receive the Canterbury Graduate Scholarship for three years of seminary study, which helped enable her to complete the Masters of Theology (M.Th.) seminary degree with a major in Systematic Theology and Philosophy of Religion at the Perkins School of Theology in Dallas, TX. Her work for the M.Th. seminary degree also included three summers at Union Theological Seminary in NYC, plus considerable study with the late Mitered Archpriest Photius Donahue (Dr. Francis Donahue, Ph.D.), a full professor in the Religion Department at Michigan State University in East Lansing and founder of St. Andrew Orthodox Church, near the campus in East Lansing. Fr. Photius served as a mentor for her, both as her Pastor and Spiritual Father at St. Andrew's Church, and academically as a professor at MSU.

Furthermore, as a lover of the arts since she was a young child, many doors opened up for her as she pursued the study of Art History at Michigan State University and received an M.A. (Master of Arts) degree in Art History. She then completed an Interdisciplinary Ph.D. (Doctor of Philosophy) in Art History, Religion and Philosophy, also at Michigan State University, in which Fr. Photius Donahue played a pivotal role, including serving on her doctoral committee.

Dedicated to religious education since high school, while in college and after, Sister Ioanna envisioned writing and creating adult religious educational materials in which she could communicate complex theological and philosophical concepts in a manner that people without advanced theological and philosophical training could understand. Her many years of college teaching gave her much experience in communicating complex ideas in understandable ways.

Beginning in 1974 and throughout the 1970's and 80's, Sister Ioanna gave numerous public slide-lectures and retreats about the meaning, history and interrelationship of Orthodox arts—icons, architecture, music and liturgy—and how they express Orthodox theology and spirituality (one of her various major specialties). Then, since 1986 she has been working on applying and combining her varied academic knowledge, experience in teaching and writing, and her love of the arts, to the creating of materials for Orthodox adult education and evangelism/mission. This work especially involves using the video art-form—making videos/DVD's—but also includes writing books and articles/essays, and making audio-recordings of Orthodox prayers and audio-books. In order to publish and distribute these materials for Orthodox adult education, she established Firebird Videos, Audios & Books in February 1992, that grew out of the Russian Treasures documentary film series that was incorporated in 1988. Many of Sister Ioanna's articles and essays are available on this website, in the Articles and Saints' Lives and 7 other sections. The primary work in the Lord's vineyard, to which she wishes to dedicate the rest of her life, is to continue writing and publishing, in addition to creating an on-going series of 30-40-minute educational DVD's, entitled "What in the World is the Orthodox Church?" dealing with many different aspects of the Orthodox Faith, arts, spirituality and history. The narrations of the first 4 DVD's in this series are available to read as essays in our Articles section: http://www.stinnocentmonastery.com/whatintheworldistheorthodoxchurch. html   She also intends to publish many of her writings in order to make them available to more people.

In addition to her academic endeavors, since childhood, Sister Ioanna has always loved the arts, and had been involved in doing many different art forms, especially singing. Previously, for 30 years she sang all the Divine Services at St. Innocent Church, is an experienced choir director and chanter, and is knowledgeable about the complexities of Orthodox liturgical practice and liturgical theology.