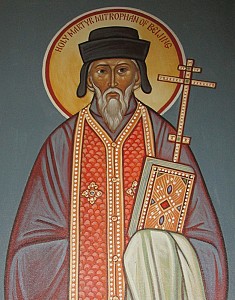 Few Orthodox are aware that just over 100 years ago hundreds of Orthodox Christians in China gave up their lives for Christ and His Holy Church, including the first Chinese Orthodox priest, St. Mitrophan of Beijing. The feast day for these Chinese martyrs is June 11th.

Throughout the 19th century, Western nations kept forcing China to submit to humiliating trade agreements, while China resisted the unwanted foreign influence. In 1899 and 1900, in the so-called “Boxer Rebellion,” many Chinese rebelled against foreigners and foreign influence, blaming them for all their many problems and misfortunes. Christianity was considered “foreign” and thus sincere and devout Chinese Christians were targeted. On June 10, 1899, proclamations were posted all over Beijing, calling on Chinese to slaughter all Christians, and on June 11th China shone in glory as it offered up hundreds of martyrs for Christ. The leaders of this misguided Chinese uprising and those in whom Satan succeeded in arousing hatred for Christians, conducted processions through the streets of Beijing, carrying their pagan idols aloft. They went to the homes and churches of Christians, forcing the Chinese Christians to either burn incense to their idols, or be killed. Whereas some capitulated to save their lives, hundreds of others, whose faith was stronger, boldly confessed Christ. Of the approximately 1,000 Orthodox in Beijing, about one-forth of them were martyred at this time. Many of these martyrs were forcibly led out of the city to the temples of the idols, where, after brutal tortures, they were beheaded or burned to death.

St. Mitrophan received his martyr’s crown along with his wife, Matushka Tatiana, his 23-year old son, Isaiah, and his young son, John, who refused to complain as the idol-worshipers cut off his nose, ears and toes. As St. Mitrophan sat amidst the burnt-out ruins of his church, encircled by his flock, he had to endure witnessing his family being slaughtered before his eyes. The executioners taunted the saint, calling him a “child of demons.” But he replied calmly, “I am an Orthodox Christian and I believe in Jesus Christ, and I have nothing to do with demons.”

After St. Mitrophan’s execution, his future daughter-in-law, Maria, the 19-year-old fiancée of the now martyred Isaiah, arrived at the priest’s house. After Maria helped many of the faithful to escape by climbing over the garden walls, she bravely faced the rampaging rebels who had surrounded the house, reproaching them for their unjust murder of so many innocent souls. They wounded her hands and feet, encouraging her to flee and be saved from death. But she preferred to die for Christ, together with her fiancé and his family. Maria bravely declared: “I was born here at the Church of the All-Holy Mother of God, and I will die here too.” Then the Chinese rebels executed her. The Chinese Orthodox Church today proclaims that through the self-sacrifice of these brave Chinese Orthodox martyrs, “that Orthodoxy has no borders and is above race, nations and languages. The Orthodox Church is the Church of all nations, people, languages, and stands before God to offer praise and worship.”